“Splash” Sculpture in a Dry Fountain

A clever repurposing of a fountain, without any water

This sculpture group, of three children playing in a fountain, doesn't actually have any flowing water around it. The children appear to be frolicking in water, but instead they are standing in a basin filled with dirt and flowers.

Jon D. Hair was the sculptor, and the work was commissioned in 2002 for United Cerebral Palsy by Irwin Belk.

On an odd historical note, the 500-pound statue was stolen in 2012. After being missing for several days, it was found in a residential yard in Charlotte, by a woman who initial thought it was a surprise gift from her son. 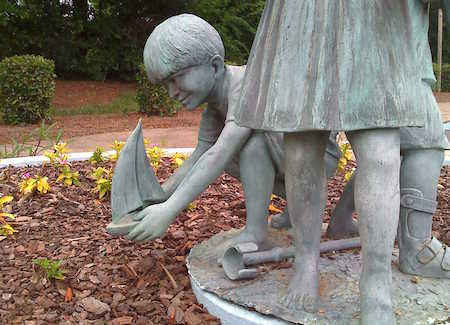